Despite just 2.5% sales growth in the third quarter, Fastenal is poised to take market share in industrial distribution, according to one analyst. See what the distributor has working in its favor.

The company is now “optimally positioned” to take share in the industrial market.

That was the assessment of Baird analyst Dave Manthey, who sent a note to clients after Fastenal reported 3Q earnings and after company management held one-on-one conversations with the investment bankers who cover the industrial space.

“We believe FAST remains in an optimal position to capture an increasing share of the vast onsite/vending/VMI market opportunity,” Manthey wrote. “With valuation about in-line with historical premiums for an industrial company growing earnings amid a recession with good cyclical upside, we would use today’s weakness to add to positions in this best-in-class distributor.”

First, a look at how Fastenal performed in 3Q. The company reported third-quarter sales of $1.4 billion, a 2.5% increase compared with the same period a year ago. Quarterly profit was $221.5 million, up 3.7% compared to the year-ago period. Both totals beat Wall Street’s estimates.

Fastenal said the 3Q increase was driven primarily by higher unit sales of safety products, whose volume moderated relative to the pandemic-driven level of “surge” sales in the second quarter of 2020 but remained elevated relative to 3Q 2019.

The company also said the “reopening of the economy has been accompanied by greater demand for personal protection equipment (PPE), hand sanitizer and related products, which more than offset continued softness in underlying business activity owing to a generally weak industrial marketplace for products unrelated to mitigating the effects of COVID-19. The impact of product pricing on net sales was immaterial, as price levels were broadly comparable to those of the third quarter of 2019.”

So, how does a pedestrian quarter — by Fastenal’s standards, anyway — position the company for taking share in the industrial market? Manthey says the company is bolstered by its status as a leader in “onsite” — which the company defines as “dedicated sales and service provided from within, or in close proximity to, the customer’s facility” — and vending services.

“Taking out the month-to-month safety noise, FAST is uniquely positioned to capitalize on the vast markets for onsites and vending, reflecting the company’s local presence, in-house logistics, frugal cost structure, access to proprietary vending technology, reputation as a supply chain partner and unique culture, among other factors,” he wrote.

Manthey said Fastenal management “estimates the onsite and vending market potential could represent ~70% of total available spend in the marketplace,” and that Baird itself has estimated that Fastenal has “just ~7% market share of the $40 billion-plus annual market for industrial vending and onsite, demonstrating the significant growth opportunities ahead.”

After seeing a dip in vending product dispenses in April and May, the company has seen them steadily rise as it found its footing amid the pandemic (see chart below). 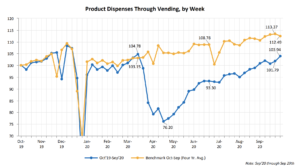 Now, Fastenal is working to increase both its onsite and vending goals that had been scuttled when the pandemic hit back in the spring.

Fastenal is No. 7 on MDM’s 2020 Top 40 Industrial & Construction Distributors list after posting $5.3 billion. While there is a lot of room between Fastenal and No. 6, Motion Industries ($6.5 billion), the company is resolute in its pursuit of both short- and long-term targets.