This article is part of MDM's 2015 Distribution Trends Special Issue. It provides a look at the strategies distributors are using to fill their benches with new talent.

The annual feature was researched and written by MDM editors based on interviews with dozens of wholesaler-distributors, as well as industry experts and manufacturers. MDM also conducted a survey of its readers to uncover the trends outlined in this issue.

The full special issue is available to download in PDF format to MDM Premium subscribers. Subscribe below for full access. Or log-in if you are already a subscriber.

Trends outlined in the 2015 report include: 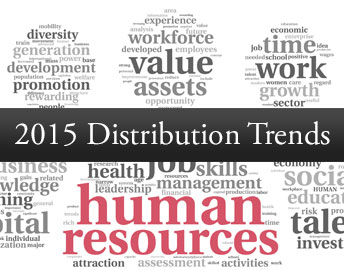 This is a part of the 2015 Distribution Trends Special Issue. The annual feature was researched and written by MDM editors based on interviews with dozens of distributors, as well as industry experts and manufacturers. MDM also conducted a survey of its readers to uncover the trends outlined in this issue.

Distributors overwhelmingly cite talent as a key concern for their companies and for the industry – whether it's recruiting and training employees or grooming them to become the next generation of leaders. Companies use a myriad of strategies for their people acquisition and retention strategies, but when discussing their foremost human resource concerns, distributors and consultants resort to a familiar metaphor.

"You've got to have people that will fill the bench," says Skip DeVilling, president of DeVilling & Associates LLC. "People are starting to see that. They start looking ahead and see a VP or sales manager that's on the brink of retirement, and they realize they have no bench."

Many companies lament their inability to recruit and hire their share of new faces, and now the "demographic clock is working against most distributors," says John Salveson of Salveson Stetson Group.

As a distributor's bench thins and the industry changes, the consensus is that distributors should empower their HR or talent acquisition departments – or establish one of these, if necessary – to actively address the company's current and future needs, and then create ways to meet them.

Once they identify the position they need to fill, they can begin searching for the right candidate. A popular choice is to align with a university program, something SRS Distribution Inc., McKinney, TX, has done for two decades.

"We really have been investing in industry-leading recruiting, college recruiting programs for sales and management trainees for 20 years," says President and COO Dan Tinker. "And so we have a huge advantage in depth and a significant investment in future leaders and future sales managers."

This proactive approach is especially popular because distribution isn't as "sexy" as other industries, such as high-profile tech firms in Silicon Valley, says Ed Smith, president of Electronics Marketing Americas for Avnet Inc., Phoenix, AZ. That perception can make recruiting younger employees a challenge while also highlighting the need to get in front of them early through internships.

"We take in a lot of interns from different colleges, a lot of the programs from Texas A&M and other prestigious supply chain programs," Smith says. "Then we give them jobs and many of them find out they actually like it and then stay."

WinWholesale, Dayton, OH, has been intentional about its desire and need to recruit qualified employees, even hiring a vice president of talent acquisition earlier this year, whose sole task is to "find new blood, find new younger leaders from the outside," says Corporate Communications Manager Maury Williams.

In addition to traditional recruiting efforts, WinWholesale also looks at an institution that provides transferrable real-world and leadership skills in addition to academics – the armed services.

"When you are an officer in the military, whether it is the Air Force, Army, Marines, whatever the case may be, you have that decision-making ability and the ability to run your unit, whatever it is you were in charge of," Williams says. "You have that same kind of decision-making ability and self-governing with a WinWholesale company. We have enticed quite a number of ex-officers into our company."

And still others, such as Alliance Distribution Partners LLC, Gallatin, TN, are looking outside distribution. For example, the company hired someone from the publishing world to help bring structure to data presentation, says President Roger Woodward, who believes the right candidate can be trained on the distribution business – a growing consensus among industry execs.

Eric Smith, a former MDM Editor who rejoined the company as Senior Analyst in May 2020, is an award-winning business journalist whose coverage focus includes economic news and insights, industry trends, M&A, and analysis of small businesses and public companies across the wholesale distribution marketplace.
Recommended Reading
Leave a Reply