Why Third-Party Sellers Are Important to Amazon

Third-party sellers are kicking our butt. Badly. That’s how Amazon CEO Jeff Bezos assesses the percentage of physical gross merchandise sales – 58% of total merchandise sales – on Amazon by independent third-party sellers in 2018. In his annual letter to shareholders, he notes that third-party sales have expanded at a compound annual growth rate of 52% since 1999, to a total of $160 billion in 2018 (see chart below). That compares with its own first-party business compound annual growth rate of 25% for the same period, to a 2018 total of $117 billion.

What It Means for Distributors

While Jeff Bezos may say that third-party sellers are kicking Amazon’s behind, we know more than a few distributors who say that Amazon is kicking theirs a lot harder in picking off longtail-spend commodity items as well as more mainstream categories. There’s another important element here. Third-party sales are much more profitable for Amazon. By some analyst estimates, Amazon’s operating margins are in the 20% range or higher, depending on specific services and fees. Without carrying inventory. That should ease the pain a bit.

That compares with Amazon’s estimated first-party margins of mid-single digits. That puts the third-party business in the same neighborhood as its AWS cloud business, where Amazon has reported 26% operating margins over the latest 12-month period. More importantly, if the margin estimates above are in the ballpark, that means third-party net contribution is a far larger contributor to Amazon’s bottom line, up to five times, than its first-party sales. 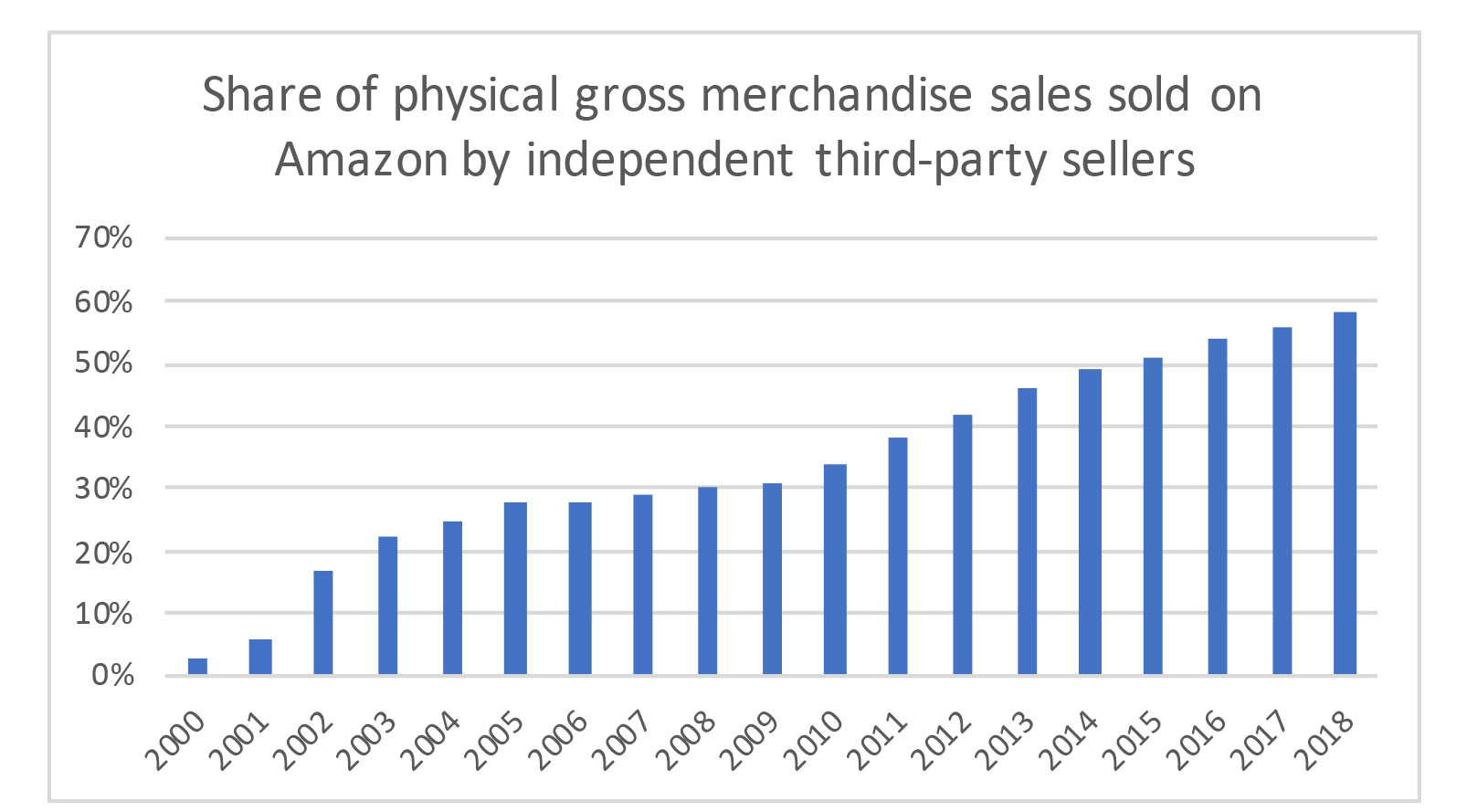 Amazon said last October that its Amazon Business marketplace sales had reached a $10-billion annual sales run rate. Based on the total 2018 third-party sales rate for all merchandise, that translates into Amazon Business accounting for a little more than 6% of all Amazon’s third-party sales. Note: While Amazon gave guidance in the third quarter on the $10-billion run rate for 2018 Amazon Business, it still does not provide actual financial performance for this segment. MDM estimated that its sales for core industrial products was $4 billion in 2017.

Bezos offered what he described as one part of the answer for why its independent sellers were able to grow faster than Amazon’s own sales: “We helped independent sellers compete against our first-party business by investing in and offering them the very best selling tools we could imagine and build,” he wrote. He says the combination of Fulfillment by Amazon and the Prime membership program as “meaningfully improved the customer experience of buying from independent sellers.”

This increase in third-party seller percentage strengthens Amazon’s negotiating power with independent sellers. As my colleague and lead MDM Amazon analyst Ian Heller has pointed out, the higher that third-party percentage number, the more protection Amazon gains from efforts to cast it as a monopoly. Ultimately, it gives the company more freedom to set and specify terms and conditions for its sellers, reducing the likelihood of government intervention or regulation.

For a deeper look, see Ian’s nice analysis of Amazon’s cash strategy that he wrote last July. It looks at a few different angles of the risks B2B third-party sellers face as well as its core financial model. Another great resource is Your Amazon Business Playbook, which we produced last year and provides a strategic evaluation of Amazon Business for distributors.

As always, I welcome your comments. Please leave them below or contact me at tom@mdm.com.