This Munich-based, third-generation distributor of bearings, power transmission, fluid power and tooling products took a non-traditional approach to transforming into a digital distribution business. It started by digitizing and strengthening the automation capabilities of its back-end systems purchasing, inventory management, logistics before focusing on the sales side of the business. And it accomplished this transformation by developing its internal technology and development expertise, thus being able to customize and enhance ERP and other critical platforms. One of MDMs 2019 Digital Innovator Award winners, heres Ludwig Meisters story on how the distributor has built a culture of digital innovation.

This Munich-based, third-generation distributor of bearings, power transmission, fluid power and tooling products took a non-traditional approach to transforming into a digital distribution business. It started by digitizing and strengthening the automation capabilities of its back-end systems — purchasing, inventory management, logistics — before focusing on the sales side of the business. And it accomplished this transformation by developing its internal technology and development expertise, thus being able to customize and enhance ERP and other critical platforms. One of MDM’s 2019 Digital Innovator Award winners, here’s Ludwig Meister’s story on how the distributor has built a culture of digital innovation.

Ludwig Meister’s third-generation management team made a difficult decision in 2012. Instead of continuing to do business in ways that made it successful as a technical specialist in power transmission products over two generations, the team realized that the rise of e-commerce and Industry 4.0 was challenging its traditional business models.

“We had good relationships with our customers, a good technical service level and were well-respected in the market,” says CEO Max Meister. “So, when my sister Elisabeth and I decided we have to change fundamentally to get better for the future, it was at first difficult for our team to understand why we wanted to change.” Their decision was even more challenging based on the fact that the company had, as an early adopter back then, continuously invested in a state-of-the-art IT environment and management since the early ‘80s.

Nonetheless, the leadership team mapped out the following strategic objectives to guide them:

While these goals required strong digital capability, just as important was the company’s focus on becoming more analytically driven at the same time in order to measure, benchmark and keep improving. This approach guided their decision -making process for how to assemble the technology portfolio needed to achieve the company’s goals. The digital journey was a five-year project and an $8.5-million investment. And the company continues to raise its goals today.

Where many organizations focus on the front end of operations when they embark on their digital transformation journey, Ludwig Meister took a different approach. “We did it in Ludwig Meister-style,” Meister says, “which is to not start with a pretty e-commerce site, but rather to strengthen the digital backbone of the company first.”

The planning team focused on digitizing and automating purchasing, inventory and logistics first. When these projects were completed, the focus turned to e-commerce and CRM. 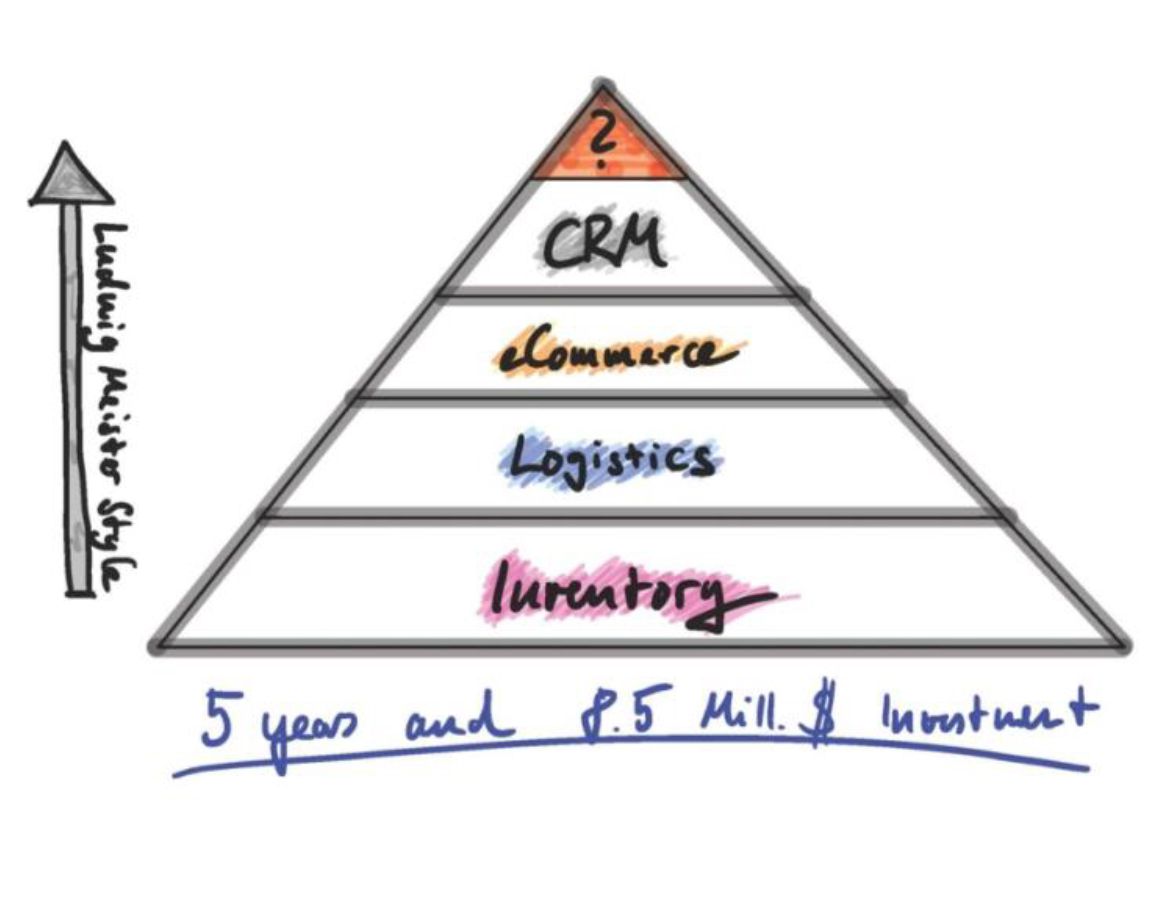 One of the first calls in 2012 was to bring data from several different systems into a single database. The company customized an Oracle database platform, and at the same time began planning and building its inventory and logistics automation systems. Integrating purchasing, inventory, logistics, customer and other operational data created a capability to do real-time and deeper data analysis and visibility. 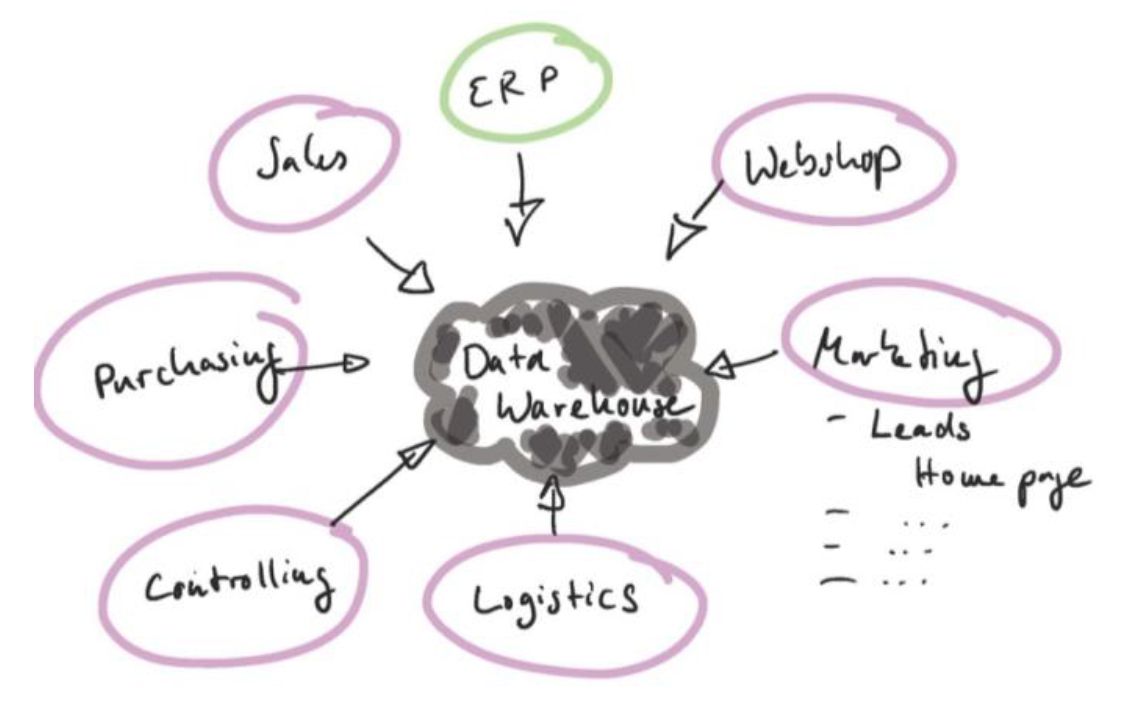 Fig. 2: Ludwig Meister’s first step in its digital transformation in 2012 was to install a data warehouse to integrate all of its operational data into a single location. It has developed its software internally for every part of its business, including ERP and CRM systems.

Just as important to Meister’s digital transformation was the decision to develop its technology and software capability internally to leverage the core database. With an IT team of 11 and management dedicated to tailor-made ERP development, the company has developed software internally for every part of its business, including ERP and CRM systems. That includes programming a made-to-measure interface to its robotic inventory management system and shipping stations. 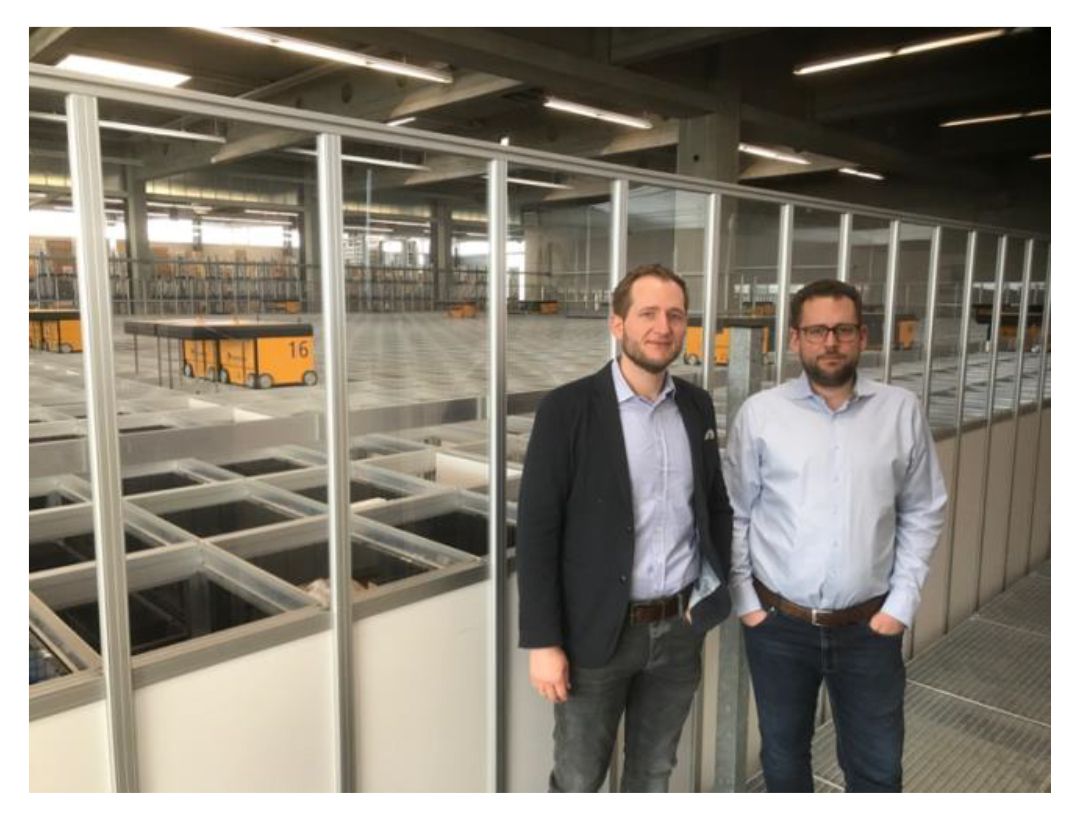 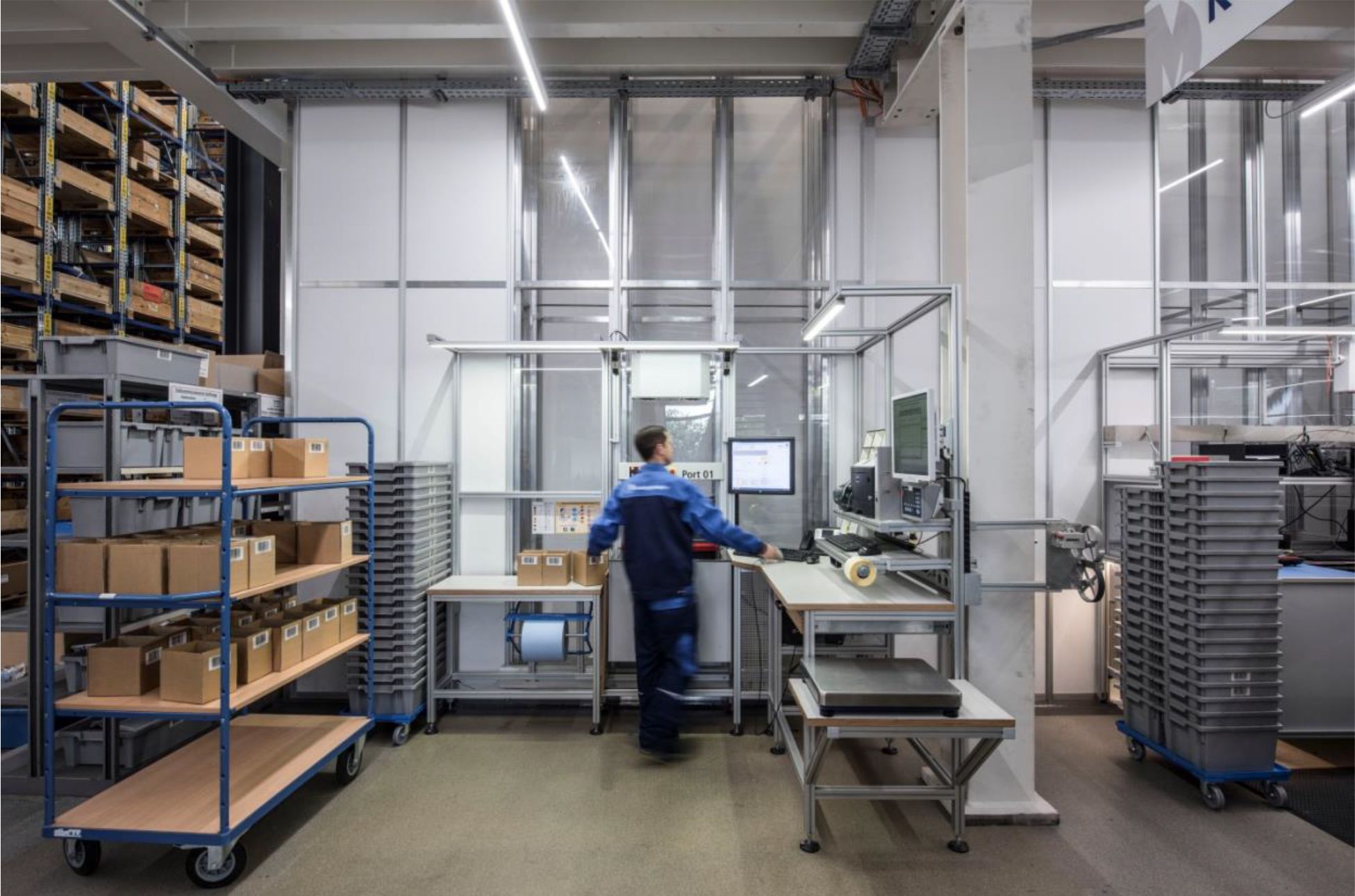 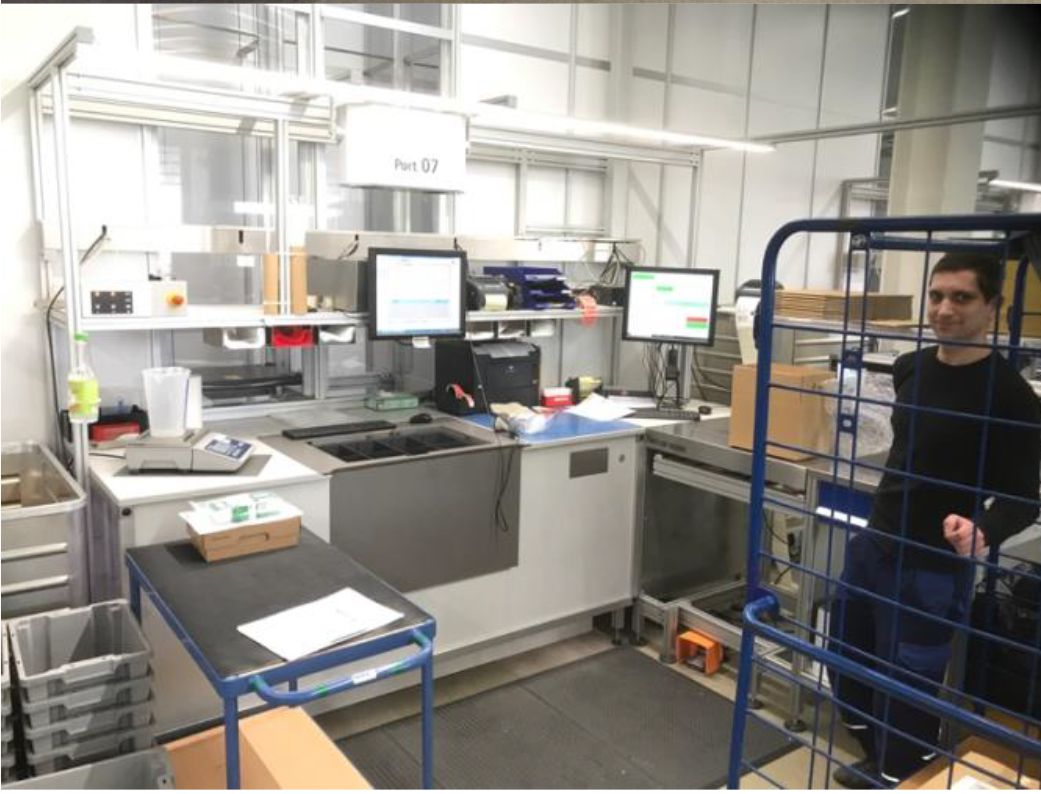 The company stores 97% of items in an AutoStore (autostoresystem.com) robotic grid inventory management system that it installed in 2013. While it maintains a traditional warehouse area for large or irregular-sized parts, the 24-level cubed system feeds shipping workstations, with an average bin pick time of 60 seconds. The self-training system leverages the Pareto principle (20% of the inventory accounts for 80% of the turnover volume) to continually increase its efficiency, with the most activity concentrated in the top four levels of the system.

Once the company completed its purchasing, warehouse and logistics digitalization projects, the next project was launching an e-commerce platform in 2015, followed by a CRM system in 2017. In keeping with its back-office automation priorities, Ludwig Meister’s earlier digitalization projects included managing incoming fax orders and automated handling of EDI and Open Catalog Interface (OCI) punchout orders. The management team intentionally made the buildout of its transactional e-commerce website a longer-term priority to focus on what it determined to be higher-value projects for its customers and to build stronger frictionless supply chain management capability.

A large focus has been to fully leverage the core database to build real-time metrics and create performance dashboards for management and the CRM for its sales team of 35 outside and 140 inside sales associates. In addition to giving the sales team deep visibility into stock and lead times, the integrated data systems from purchasing to sales have given management the ability to evaluate suppliers on quality and delivery performance. It has also allowed the company to analyze cost-to-serve data and net profitability for product lines, suppliers and customers.

But rather than focus on delivering reports to its teams in purchasing or sales, Ludwig Meister developed its own CRM and dashboard system with a focus on automated triggers and tasks. One team understands the data and analytics and then the purchasing or sales people are assigned specific tasks to complete based on the analytics. “You can make positively crazy reports. I personally love to use dashboards,” Meister says, “but in the end, if you don’t make it easy for your sales people to execute with the customers, you will have very little success.”

The triggers and tasks are built and refined based on the data model. For example, customer-specific costs are calculated and used to enable the salesperson to ask specific questions or follow a supportive script. Or a salesperson may be guided to suggest a contract for a customer based on quality arguments like lead-time data for specific products. Connecting the data — from supplier to customer behavior — led to a significant increase in customer service levels. The tasks are carefully monitored and provide both guidance and clear accountability. The tasks are also rated for relevance, and allow for deeper analysis into changes or loss of an account.

Ludwig Meister’s future vision is one of continuous improvement: increasing the efficiencies it has realized across every part of its operations, thus steadily increasing tangible value to customers and suppliers. While the company has provided value-added services such as hose and fluid system assembly, power unit construction and inventory management services, it plans to develop more differentiated and advanced service capabilities to improve its value to customers. Internally, the company plans to leverage machine learning to improve its triggers and tasks for individual customers. It also plans to expand its digital marketing capabilities to enrich its data warehouse.

While the strategic objectives it set in 2012 have guided the company’s digital journey, Ludwig Meister has also refined the way that it launches projects to increase automation and efficiency. “Our approach to digitalization project management has been to try new things, and make our teams and projects as small as possible,” says Meister. “We try to create a solution internally if we can, and focus on data collection first; then the creative ideas will follow.”

Another key to building Ludwig Meister’s culture of digital innovation is to focus on data and analytics that its systems now can integrate into its data warehouse and that its developers can manage effectively.

Perhaps the final piece of the company’s digital transformation story has been not to focus on competitors, but rather on continuous improvement to keep increasing the Ludwig Meister’s value.

That strategy is summed up in a phrase Meister likes to use in presentations as part of the “Ludwig Meister Spirit”: “Compare yourself with the past, and beat yourself every week!”