For the second time in two weeks, the building materials and construction sector saw major consolidation with Builders FirstSource Inc.’s Thursday announcement that it would acquire BMC Stock Holdings Inc. in a $2.5 billion, all-stock merger. Here’s what we know about the deal so far.

Another day, another massive shift among the top building materials and construction distributors.

The new company, which is keeping the Builders FirstSource name, will have a market value of $11.2 billion and should compete with ABC Supply Co. for the top spot in next year’s MDM Building & Construction Market Leaders list.

The shifting of top building materials distributors has been a consistent theme over the years, and both Builders FirstSource and BMC Stock Holdings have their place in the latest rankings thanks to market-shifting acquisitions that took place in 2015.

That year, BMC Select and Stock Building Supply merged to create BMC Stock Holdings. And Builders FirstSource jumped to the top of the building materials list by acquiring ProBuild — of course, the company later would be leapfrogged by ABC Supply, which itself has been acquisitive.

The building materials and construction sector has seen so much consolidation, in fact, that half of the companies on our 2010 Market Leaders list no longer exist in the same form because of the rampant M&A taking place in that category.

The Least You Need to Know

A deal of this scale is hard to comprehend until the integration is well underway and we start to see exactly how the synergies play out. But here are a few nuggets from the companies’ press release on what the new-look juggernaut will resemble. 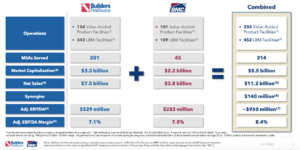 The Other Big Market Move in August

This deal follows the big news from a few weeks ago that HD Supply Holdings Inc. is selling its Construction & Industrial – White Cap business to an affiliate of New York-based private equity firm Clayton, Dubilier & Rice for $2.9 billion.

CD&R said that once the transaction is complete, John Stegeman, White Cap’s current CEO, and Alan Sollenberger, White Cap’s current president, are expected to continue to lead the Construction and Industrial business, which will include the White Cap, Home Improvement Solutions and Brafasco businesses.

CD& spelled out what it has in store for its latest asset. The firm plans to combine White Cap with Construction Supply Group — and its 17 nameplates. In this ownership arrangement, CD&R will hold 65% of the resulting entity and Sterling Group, owner of Construction Supply, will hold the remaining 35%.

According to CD&R, the new company is a “North American distributor of a diverse mix of concrete accessories and specialty construction and safety products with more than $4 billion in annual revenue. White Cap operates 270 branches with approximately 5,500 employees and offers more than 400,000 SKUs to 200,000 customers. With 130 branches and approximately 2,000 employees, CSG has a highly complementary footprint to White Cap in terms of product offering and geography, offering more than 60,000 SKUs to 65,000 customers.”

HD Supply had been No. 9 on the 2020 Building & Construction list (based on its White Cap sales), but the newly formed company with Construction Supply Group should jump into the Top 5.

In other words, based on the two monumental deals over the last two weeks, look for a revamped Top 10 Building & Construction list in 2021.

And, of course, building materials isn’t the only sector to see giant players join forces. One of the biggest deals ever in wholesale distribution occurred earlier this summer in the electrical space when WESCO International Inc. closed on its $4.5 billion acquisition of Anixter International Inc. Click here for more about that deal, including how it will resonate beyond electrical and datacomm verticals.

With Uncertainty Here to Stay, Distributors Must ‘Embrace the Suck’